Speechless at the sight of Catholics uniting over Trump

I didn't actually intend to give up blogging for Lent; it just sort of turned out that way.

Some of it was just real life stuff--bronchitis, tomorrow's root canal (gulp), spring in Texas...although we have, luckily, missed the local storm damage so far and I've also learned NOT to put the winter clothes away and pack up the heavy comforters just because we have a misleading, teasing week or four of temperatures in the 80s. That doesn't mean it's really spring yet, as our 37 degree low outdoor temperature a night or two ago pointed out quite emphatically.

But some of it was being in just a bit of a dry spell. I've been focusing on my fiction writing, but I've never really had trouble before switching from a day of writing or editing fiction to composing a blog post about real things. I think the problem is that right now the real things are, well, kind of depressing.

Take religion, for instance. On the one hand you have Catholics whose idea of good liturgy involves liturgical dance and whose main complaint with Pope Francis is that he's too conservative (e.g., he hasn't ordained women or anything). On the other hand you have Catholics who are melting down over the change in the rubrics for Holy Thursday (some of them claiming, apparently seriously, that from "time immemorial" the Church has only allowed male feet to be washed at Holy Thursday Mass--not realizing that the foot-washing was only incorporated into the Mass in the 1950s--and others insisting that the Holy Spirit created the custom of male-only foot washing because this act of Our Lord's can only refer to the ordained priesthood, and that what the Holy Spirit inspired not even the pope can change...). Even a simple thing like Pope Francis deciding to make use of Instagram becomes a cultural flash point, with Catholics on one side applauding his apparent coolness, and at least one Catholic on the other responding to His Holiness' first photo (with the pope's message: "Pray for me,") by declaring that "pray for me" wasn't a request (?) and that he personally would be praying for Pope Emeritus Benedict instead.

Or take politics, if you'd rather (I'm increasingly of the opinion that in America today taking politics seriously, or at all, can only be safely done by those already insane, but you may have a different opinion). On the Democrat side, Hillary Clinton's cakewalk to the nomination might have turned into a pie-throwing contest, except that her super-delegates have the superpower to protect her from any actual challenges emanating from Bernie Sanders' campaign; and on the Republican side--well, what is there to say, except that Donald Trump has the ability to make past candidates look almost good by comparison, because while several recent Republicans could have tied for the title of the "More Hair than Wit" candidate, Trump is all hair and...well, I won't say it, but you know I'm thinking it.

And then you add in the odd spectacle of dittohead CAPE Catholics who wouldn't know a Latin motet if it assaulted them in a church parking lot, weekly O.F. Catholics who think a biretta is something that requires ammunition and a gun license, and serious E.F. Catholics who sweetly and modestly display their liturgical superiority in comment boxes all over the Internet, all joining hands in a grand "Kumbaya" of support for a thrice-married millionaire who wants to build a wall between the US and Mexico, ban Muslims from entering the US, who supports capital punishment and torture, and who has a rather unpleasant tendency to speak slightingly of women and vulgarly of everything. On the one hand, I suppose it's slightly comforting to realize that there are, apparently, points of unity among such dissimilar groups of Catholics; on the other, one could wish that Catholics in America could agree to lay aside their liturgical differences and work together without needing to unite behind the kind of person who says that he'd be his own foreign policy adviser, and that sort of thing.

So I suspect that though I may think of my recent inactivity as a dry spell or "blogger's block," I really think I've just been rather speechless at the sight of Catholics uniting over Trump. It's one of those moments when you can't even imagine what to say.

But at least we haven't reached the point in the election when not only Catholics of all sorts, but serious Christians and other people of faith, will start to argue that we have a moral duty to vote for Trump because failing to do so is the exact same thing as voting for Hillary. Hopefully I'll be over my "blogger's block" by then, because that's the sort of thing one can't let go without challenging it.
Posted by Erin Manning at 10:14 PM 29 comments:

I'm hoping to get back to blogging more regularly soon, now that I'm (finally) getting over the winter bug I've been dealing with for three weeks now.

Before that, though, I wanted to finish up a different project, one that I've been promising for a while now. That's right: the fourth book in my Tales of Telmaja series, A Smijj of Conflict, is finally available for sale!

To order A Smijj of Conflict in paperback, go here.

To order A Smijj of Conflict as a Kindle book, go here. 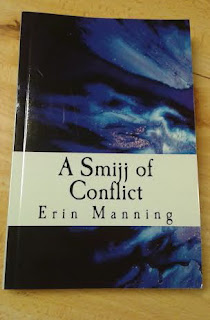 I don't think I've done this before, but I'd like to ask a favor of my blog readers. Two favors, actually--first, can you help me spread the word about this book and the Tales of Telmaja series? I write with children ages 8 to 13 in mind (though I have adult readers who enjoy the books as well), and I take seriously the idea that children's fiction should be suitable for children. My books don't contain inappropriate sexual content, and while a certain amount of violence is going to be inevitable in a series that deals with a galactic war to end slavery I try very hard to maintain a level of restraint instead of being too graphic. But what motivates me most of all is the desire to write good, imaginative adventure stories for a part of the children's fiction market that I honestly think is underserved these days, those middle-school readers who aren't terribly amused by booger jokes, toilet humor and endless tales of the classroom, but who aren't yet ready to read most of the books on the Young Adult shelf (especially the ones in the Teen Paranormal Romance section).

And the other favor I'm asking is directed at those wonderful people who have bought and read Books 1-3 in the Tales of Telmaja series: would you consider leaving a review at Amazon of one or more of the books? I've had lots of positive feedback from readers directly, but I'd love it if some of you who enjoy these stories would take a minute to post something on Amazon (and it goes without saying that if you have negative or critical thoughts those are fine, too--any honest review is welcome!).