Striving to be healthy, not thin

Susan Peterson's husband, John Christopher Peterson, bought a box of old magazines at an auction. Look at this great image from one of them! 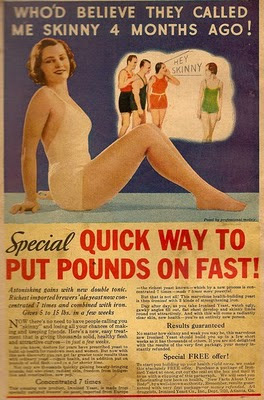 Apparently in the 1930s it was considered unattractive to look like the "skinny" girl in the "before" drawing inset; the young woman, to be considered beautiful, needed some serious curves.

As I've watched the Olympics these last two weeks, I've been struck by the difference between the athletic young men and women competing for gold, and our culture's idea of the wispy female and slender male as the height of beauty. Especially noticeable has been the difference in the "core" of the athletes, that area that extends, according to this article, from the trunk to the pelvis; unlike skinny supermodels, most of the Olympic athletes I've seen tend to have solid, muscular cores that would not meet our culture's idea of the sort of thinness in the waist that is necessary for beauty. Consider this: supermodel Gisele Bundchen is five feet, ten and a half inches tall, and weighs only one hundred and thirty pounds; skiing gold medalist Maria Riesch, who is just over five feet, eleven inches tall, weighs one hundred and seventy-nine pounds, nearly fifty pounds more than Gisele, though the two are almost the same height.

Those of us who have struggled in our lives with weight issues, myself included, often get hung up on a particular number on the scale or a particular idea of a tiny waist and slim profile. Some people are naturally built that way, true, and may struggle more to remain strong and retain good energy levels than they do to stay thin. But it's not necessary to have a tiny waist to be healthy; the magazine ad reminds us that the tiny waist wasn't always considered a benefit to one's overall attractiveness, either. The challenge for me, and for many other women, I'm sure, is to strive toward optimum health without fixating on some unattainable idea of slenderness that is not necessarily related to a strong and healthy body.
Posted by Erin Manning at 2:03 PM

Love your bio.
I was amazed to see the magazine cover.
My how our view of women's bodies have changed.

Muscle is also heavier than fat.
The models can be "toned" but have really no substance beyond that.

It was also interesting during one of the info's before one of the competitions that a skater from a previous year was told to gain weight AND to get some muscle so her partner could hold her better - not like carrying a sack of potatoes as she was at the time.

I'm with you.
The focus should be on health, not numbers.

Love that ad, and wish it was still so. While I don't endorse even soft pornography, those mid-century pin-up girls were way more attractive than today's ideal woman. And the modest way they dressed then was great too. It was intriguing because of what was hinted at by the full-figured "hourglass" shape rather than every square inch of skin just hanging out there for all the world to see.

It's all about the times we live in.

In the 30s, the despression, food was scarce. Those who were skinny were likely too poor to afford much food. Thus, the "curvy" were more likely to be wealthy.

It's similar to tanning. In Civil War days, only the poor, those who had to work, were tanned, as a result of spending many hours outside. Pale white skin was a sign of wealth and comfort and the ability to sit in the shade while others did the work. Now that working is the norm, tanning is associated with leisure time...and those who have much leisure time to lay on the beach (or in the tanning booth) are likely to be wealthy.

I find it fascinating to see how the "ideal" of beauty has changed over time.