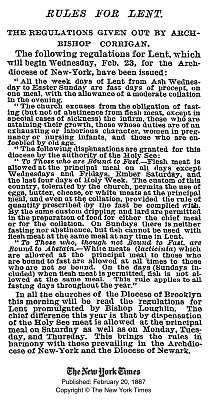 And the rules were sometimes varied. For instance, in 1915 there is mention of an indult dating from 1895 which exempted working people and their families from days of abstinence (but not fast days) other than Ash Wednesday, Fridays, Holy Week and Christmas Eve; another indult is mentioned which exempts working people from fasting as well. In an earlier article mention is made of a wide dispensation from fasting rules for various diocese dealing with influenza; in fact, an article from 1890 mentions that the pope was requiring no more than the ordinary Advent regulations because of influenza, and was instead recommending that the faithful apply themselves to works of charity during Lent. During other times, notably World War II, fasting regulations were likewise relaxed in many places.

Of course, every year various people were already exempt from the fast, as the article above lists: pregnant and nursing mothers, the ill, infirm or elderly, those who are "attaining their growth" (children), and those whose duties were "...of an exhausting or laborious character." The specifics in regard to what kinds of infirmities or illnesses exempted one, or how old children had to be when they were obliged to fast, or what exactly constituted duties "of an exhausting or laborious character" were presumably spelled out by one's own pastor in cases of uncertainty.

Why mention any of this? I find it is rather fascinating to take a look back at the past, and to see the various ways in which the rules for Lenten fasting and abstinence could change from time to time. Though the rules were certainly stricter than they are now, there were many times and reasons in which a person might be completely exempt from following them.

But no one was ever truly exempted from participating in the penitential character of Lent. Anyone who wasn't bound by the laws of fasting was still encouraged to make voluntary sacrifices or acts of penance, to remember the Church's call to give alms, and to engage in charitable works in the community.

Sometimes in the Catholic blogging world I will see expressed the notion that the Church ought never to have relaxed the rules for the Lenten fast. Those who think this way appear to think that the Church's rules regarding fasting and abstinence kept whole generations of Catholics in line, kept them physically and spiritually fit, capable of great and heroic feats of endurance. Without the stringent fasting rules, goes the argument, Catholics got soft, weak, and lazy; all the ills of modernity swiftly followed, in a classic post hoc ergo propter hoc construction.

But when I read the Apostolic Constitution of Pope Paul VI titled Paenitemini I see, not weakness or laziness, but both the appeal to freedom and a great deal of mercy. See, for instance, this section:

In the first place, Holy Mother Church, although it has always observed in a special way abstinence from meat and fasting, nevertheless wants to indicate in the traditional triad of "prayer—fasting—charity" the fundamental means of complying with the divine precepts of penitence. These means were the same throughout the centuries, but in our time there are special reasons whereby, according to the demands of various localities, it is necessary to inculcate some special form of penitence in preference to others.(60) Therefore, where economic well-being is greater, so much more will the witness of asceticism have to be given in order that the sons of the Church may not be involved in the spirit of the "world,"(61) and at the same time the witness of charity will have to be given to the brethren who suffer poverty and hunger beyond any barrier of nation or continent.(62) On the other hand, in countries where the standard of living is lower, it will be more pleasing to God the Father and more useful to the members of the Body of Christ if Christians—while they seek in every way to promote better social justice—offer their suffering in prayer to the Lord in close union with the Cross of Christ.

Therefore, the Church, while preserving—where it can be more readily observed—the custom (observed for many centuries with canonical norms) of practicing penitence also through abstinence from meat and fasting, intends to ratify with its prescriptions other forms of penitence as well, provided that it seems opportune to episcopal conferences to replace the observance of fast and abstinence with exercises of prayer and works of charity.

The purpose of restricting the days of obligatory fasting to Ash Wednesday and Good Friday, and of making abstinence from meat mandatory only during Lent, I think, was not to remove the penitential character from Lent, but to encourage those in wealthier countries to do more than fast from food, while removing from those already living in poverty any sense of being obliged to participate in fasting.

That those of us in more affluent countries have, by and large, failed to give witness against the spirit of the world by our acts of voluntary penance during Lent is our failure, not the Church's. That those who live in poorer countries no longer have to worry about sinning when they must eat at odd times during the day in Lent because food is available then, or because their daily work does not permit normal mealtime pauses, is still a mercy. That the scrupulous need not fear the forty days of Lent as a grueling journey in which every passing thought of a good meal haunts them as a grave sin is also a great mercy.

So instead of grumbling that the Church no longer demands that our neighbor subsist on one full meal a day for forty days, we ought to take some time to reflect, instead, on what the Church is inviting us to do. Perhaps the traditional fast is something our work and station in life makes not only possible but a joyful possibility; perhaps our tendency toward mild hypoglycemia makes our fasting a greater (involuntary) penance for those around us then for us, personally; perhaps we are being called to fast from something other than food, something that has gotten in the way of our relationship with God; perhaps there are luxuries and daily "treats" we have become accustomed to indulge ourselves with, and to diminish with these things the dreariness of the winter months. If we truly wish to respond generously to the invitation of the Church to make all but Ash Wednesday and Good Friday days of voluntary instead of obligatory fasting, we will discover what it is we can with the greatest generosity set aside and give up for these forty days.

As Pope Paul VI said in Paenitemini, fasting which is only external is not what the Church really wants of us; nor does she wish us to become mired in what His Holiness called "formalism and pharisaism." Rather, the external acts, united with prayer and works of charity and oriented toward inner conversion, are to be embraced as a necessary step in the pursuit of holiness. As we approach this Lenten season we may be surprised by the generosity and love the Holy Spirit will inspire in us, so that we may experience Lent as a time of purification.
Posted by Erin Manning at 9:00 PM

I think you've made a really good point here. I remember one of my uncles once remarking "It's kind of weird, isn't it? Since we can't have meat on Fridays in Lent, we're having salmon instead of chicken." The irony, of course, is that salmon is more of a luxury food than chicken!

I like your thought of fasting from something other than food. I've been turning around the idea in my mind of how to fast from negative thoughts--that is, always to think well of people, and to praise God even when I really, really don't feel in the mood for it.

Thank you for this post. I especially appreciated the link to the old fasting regulations. It is interesting to see what stays the same and what changes . . . and what the real point behind it all really is.

Sensible... have you ever aspired to be Bishop of Rome?